The chaotic organization operates on the fringes of being out of control. It is problem-oriented. People are reactive and manage by attending to the pressure of the moment. Expectations, policies, standards, etc., are unclear, not agreed upon or poorly enforced. Good ideas and intentions abound, but there is not enough unity, commitment or follow-through to carry them out. Work is unpleasant for most individuals. People act out of self-protection by blaming and criticizing others, and hence, set up a climate that perpetuates fear, suspicion, hostility, and frustration. The problems of the chaotic organization are the lack of routine, lack of clarity, and hence, anxiety about what to expect from moment to moment. Needed are more formalized structures, routines, accountability, and clarification of policies, expectations, and roles.

The stable organization is characterized by predictability and control. Structure, routine, policies, etc., have been established to remove uncertainty from the environment. Goals are clear and people understand who is responsible for what. The major focus of the organization is to ensure an efficient daily operation. People within this climate tend to be dutiful and expect fairness. Conformity is the watch word, and people are rewarded for compliance rather than risk-taking and innovation. The purpose of the organization is subservient to its efficiency. The limitation of an organization that fails to grow beyond stability is that efficiency is more important than innovation and development. Doing things by the book and following the procedures becomes more important than the purpose and mission of the organization. Such companies are eventually left behind as customers find more responsive competitors. Needed are a long-term vision, emphasis on growth and development and a culture in which people exercise greater autonomy in making decisions and solving problems.

The essence of high performance is shared ownership. Employees are partners in the business and assume responsibility for its success. These organizations are highly participative and collaborative. Their members have extensive decision-making and problem-solving responsibilities. Line of site is on serving the customer rather than the formal organizational structure. The mission of the organization, rather than rules and policies, guides day-to-day decision-making. Such an organization is founded on a unique and strong culture derived from a clear set of values expressed and reinforced by its leaders. Those values provide focus on what is important while allowing flexibility and innovation. The processes, systems and structure of the organization are designed to be in alignment or harmony with the values of the organization. The high performance organization adopts a long-term point of view. The development of people is seen as a primary management task. Trust and cooperation exist among organization members. People don’t blame or attack others because doing so is not in their own best interest.
An important learning from this model is that an organization cannot become high performing without a foundation of stability. Ironically, high performance requires not only participation, flexibility, and innovation, but order, predictability and control. The leaders of many an organization have attempted to grow from chaos to high performance without the underlying foundation of stability and consequently failed or been frustrated in their efforts. Leaders who want to create high performance work systems must be certain that they implement processes that ensure stability as well.

Initiatives to Create a Climate of Stability

Creating stability has to do with getting back to the basics of good, sound management practices. Consider that the first step a good sports coach will take when his team is floundering is reinforcing the fundamentals: blocking and tackling; motion and passing. Likewise, senior managers within a chaotic, floundering organization need to get back to the fundamentals of good management by creating structure and order. There are two paths to structure and order. One, harmful in the long-run and contrary to a high performance philosophy, is “control” (directing and telling) which represents a short-term, knee jerk response to symptoms rather than root causes. The second and more productive path to stability is “clarity”; clarity of direction, goals and priorities; clarity of roles, responsibilities and performance expectations; clarity and documentation of processes and procedures. Clarity communicates the boundaries within which people do their work and make decisions. It doesn’t rob them of their responsibility but establishes the rules of success. The consequence is structure and order that form the foundation of a strong organization.

Initiatives to Create a Climate of High Performance

Although there are many aspects of high performance, it begins by defining an inspiring ideology which consists of the deepest beliefs and values of the leaders of the organization. An ideology, thoughtfully developed and implemented, establishes the attitudes and habits of people throughout the organization and forms the boundaries within which people make decisions and conduct themselves in their relationships with others.

An ideology must be translated into a way of life reinforced by the entire the infrastructure of the organization. Core business processes, policies and procedures, layout and use of facilities, reporting relationships, information-sharing, planning, recruiting and selection, training, compensation, and so on, must be aligned with the ideology and strategy of the business. Such alignment results in dramatic improvements in quality, cycle time, productivity and employee commitment.
Another aspect of a high performance organization is that people are deeply valued. Decision-making and problem-solving are pushed to as low a level as possible. Problems are solved when and where they occur. Jobs are enriched so people have the authority, training and support to do whole and complete tasks. Such empowerment, however, does not happen by decree. It is a process which must be charted by an organizations leaders. This includes specifying the boundaries within which teams of people will work, identifying the tasks and responsibilities for which people should be accountable, designating leadership roles within teams, developing a time-line for taking on new roles, and providing the information, training, and resources needed for people to be successful. As this transfer of responsibility occurs, the motivation of organization members changes from mere compliance to commitment and a genuine desire to contribute.

There is no magic in moving beyond chaos. There are no simple formulas. Real organizational development requires commitment and hard work. However, for those who want to eliminate waste, improve quality, provide better customer service there are powerful initiatives that can lead to a foundation of organizational stability and eventually high performance. 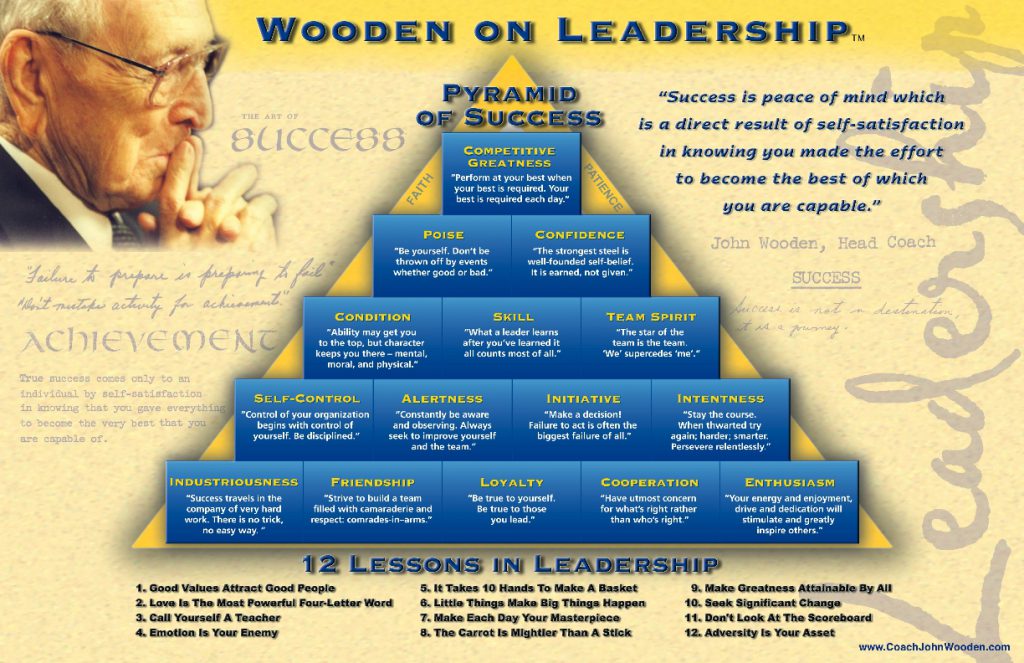 Click here to see an interactive version of this pyramid.